Pictures below by Papa Mike

Recall that the Solyndra Corporation, a “green” company loved by Obama and the left, recently declared bankruptcy.

I started posting about the bankruptcy here, then migrated to how they’d contributed so much to Obama then blogged about how often Solyndra execs had visited the Black House.

White House records confirm all the visits and now the FBI are investigating: 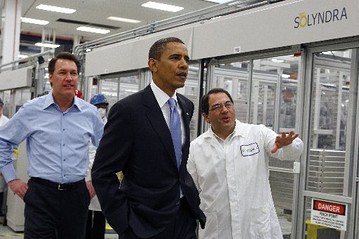 Agents arrived at 7a.m. and are examining the factory. Solynrda has a skeleton crew of 100 workers on the scene, closing the factory down. A CNBC photographer on the scene says the FBI has promised a press conference. An agency spokesperson at its San Francisco headquarters says he’s unaware of any such plans.

Solyndra filed for bankruptcy last week, shocking both workers and the Obama administration, which had given the startup hundreds of millions of dollars in low interest loans. Congress has demanded a hearing into the matter.

And it looks like the Senate and the House will be investigating.

Hat Tip To KICKIN’ AND SCREAMIN’