It is a classic moment in the weeks before Election Day: a news outlet runs a front-page exclusive promising scandalous revelations about a big-ticket candidate.

This week, the New York Post published a story based on what it says are emails — “smoking gun” emails, it calls them — sent by a Ukrainian business executive to the son of Democratic presidential nominee Joe Biden. The story fits snugly into a narrative from President Trump and his allies that Hunter Biden’s zealous pursuit of business ties abroad also compromised the former vice president.

Yet this was a story marked more by red flags than investigative rigor.

The venue is also suspect. The pro-Trump New York Post is owned by Rupert Murdoch, a steady supporter of the president despite recently casting doubt on Trump’s re-election prospects. The lead reporter was a former producer for Sean Hannity, Trump’s best friend on his favorite news network, Fox News, also controlled by the Murdochs. And the story asserted the existence of a meeting absent any documentation that it actually occurred. (The Biden campaign says the tabloid never sought comment on the veracity of the claims.)

The context also screams for caution: U.S. officials say Russian disinformation campaigns have sought to keep Hunter Biden’s business dealings in the Ukraine in the public eye. According to the Washington Post, intelligence officials warned the White House last year that Russian operatives had sought to give misinformation to Giuliani to be used against the Bidens. And NBC is now reporting that the FBI is investigating whether the material in the New York Post story originated in a foreign power’s disinformation campaign.

With all these warning signs, other news organizations, including NPR, have held back. Reporters who shared the New York Post story on social media found themselves denounced by Democrats and even many of their peers. Twitter blocked and Facebook restricted the spread of the story, rare moves that gave conservatives a chance for outrage regardless of the merits of the reporting. The social media giants soon found themselves on the defensive.

All of which obscured the problems with the New York Post’s story itself, and those that followed.

So here are some quick highlights:

From pillar to post, the tabloid asserted as fact things presumed to be true. While the headline links the former vice president to his son’s business dealings, the story serves up no proof. It rests upon an email, supposedly from an Ukrainian businessman to the younger Biden, thanking him for “an opportunity to meet your father.”

Biden’s campaign spokesman, Andrew Bates, responded, “We have reviewed Joe Biden’s official schedules from the time and no meeting, as alleged by the New York Post, ever took place.” There is some wiggle room in that denial. But that’s not proof, either. The New York Post nonetheless asserted, breathlessly, and assuredly, that there was a “never-before-revealed meeting.”

Second, let’s talk about the origin of those emails, working backward from the article’s account. The New York Post secured them from a copy of a laptop’s hard drive given to the paper by Giuliani, after learning of their existence from former Trump campaign CEO and political advisor Steve Bannon.

The laptop had been taken to a repair shop in Delaware; its owner appears to have reviewed its contents and given it to the FBI, after making a copy and delivering that to Giuliani’s attorney. The New York Post reported the computer repair specialist “couldn’t positively identify the customer as Hunter Biden, but said the laptop bore a sticker from the Beau Biden Foundation, named after Hunter’s late brother.”

So, it’s not clear who brought it in.

As it turns out, Bannon told a leading Dutch public broadcaster last month that he had a copy of Hunter Biden’s hard drive.

“You’ll see. Stand by. Stand by,” Bannon teased on camera.

Now about Giuliani: Few advocates and surrogates have been more dogged on Trump’s behalf than the former New York City Mayor and U.S. Attorney.

Especially on the topic of Ukraine and the Bidens.

Giuliani has repeatedly amplified discredited claims, to the point that Fox News’ internal research team warned the network’s journalists against relying upon him. Among the sources Giuliani turned to was a man whom the Trump administration’s Treasury Department has designated as a Russian agent. Last month, Treasury officials said Andrii Derkach has pushed disinformation in Ukraine to spur unfounded corruption investigations and media coverage in hopes of damaging Biden and influencing the 2020 race. Giuliani did not respond to a message seeking comment for this story.

This story would fit neatly within that rubric. We don’t know whether those emails were somehow hacked and doctored, or completely fabricated. (Even Murdoch’s Wall Street Journal acknowledged the point, writing “assuming the emails turned up by the New York Post are real…” as it editorialized against Twitter and Facebook.)

Shall we turn to the reporter with the lead byline for a moment? 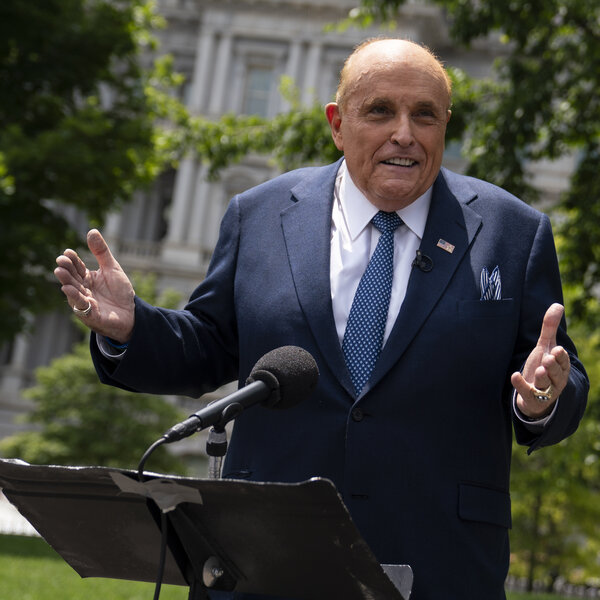 Giuliani Distances Himself From Ukrainian Sanctioned By U.S. As Russian Agent

Post deputy politics editor Emma-Jo Morris’s reports on Biden this past week constitute the sum total of her professional bylines. (That is, other than some posts Morris wrote in the summer of 2015 as a college intern for the conservative Washington Free Beacon.)

Prior to joining the Post in early spring, Morris’s most prominent media job involved her three years and eight months as a producer for Hannity, the Fox News star who is one of the president’s closest advisers. Morris did not reply to requests for comment sent to her social media accounts. She shared bylines with Gabrielle Fonrouge, a six-year veteran of the Post who earlier reported for NPR member station WSHU in Connecticut. (One small note: Fonrouge’s byline came second. Were they assigned alphabetically, it would have appeared first. That suggests that Morris is the lead reporter on this project. But, as with just about everything in this story, that’s not firm proof, either.)

On Fox, Hannity repeatedly has suggested Joe Biden acted improperly in Ukraine. Let us remember that Trump’s demand for investigations of the Bidens’ actions in Ukraine formed the foundation of the president’s impeachment by the House of Representatives last year. Hannity actively sought to discredit those who offered damning testimony against the president.

The New York Post’s story and its ensuing allegations against Hunter Biden, based on the same cache of material, has propelled its corporate cousin as well. As the days tick down toward Election Day, Fox News took inspiration from the tabloid’s reporting to unleash a fusillade against the former vice president across its most watched shows — like the grand finale of a fireworks display.

None of that sound and fury requires the rest of the press to accept those claims as true. They shouldn’t. Not without additional reporting and verification.