Prosecutors say they continued to plot “to oppose by FORCE the lawful transfer of presidential power” after the Capitol riot failed to block the electoral college vote, according to the Justice Department

The Justice Department escalated its January 6 investigation by bringing seditious conspiracy charges against 11 defendants, including the leader of the Oath Keepers, Stewart Rhodes.

The latest accusations — with a charge that had not previously been brought in the department’s US Capitol attack prosecutions — remove any sense that prosecutors believe the riot emerged from just a group of overzealous protestors, with new details about the planning and logistics alleged to have predated the Capitol breach.
The Justice Department until now had been careful not to push the idea of sedition, instead charging defendants affiliated with right-wing groups with conspiracy to obstruct the congressional proceeding on January 6. The seditious conspiracy charge carries the same possible consequence as an obstruction charge, but is rarely used, politically loaded and has been difficult for the Justice Department to use successfully against defendants in the past. 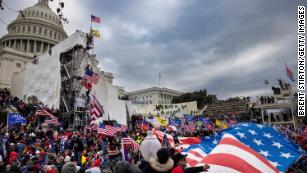 READ: Seditious conspiracy indictment related to US Capitol attack
Attorney General Merrick Garland had balked at the earlier efforts to bring the seditious conspiracy charge. But in the months since, people briefed on the matter say FBI investigators and DC federal prosecutors have spent much time building the case, at least in part with the help of cooperators and the benefit of internal communications among the Oath Keepers.
The new indictment brings to light planning the Oath Keepers are accused to have done ahead of the Capitol attack, as they allegedly recruited members, stocked up on weapons and organized to disrupt Congress’ certification of the 2020 election. Prosecutors say they also continued to plot “to oppose by force the lawful transfer of presidential power” after the Capitol riot failed to block the electoral college vote, according to a Justice Department statement on Thursday.
This story has been updated with additional details.

CNN’s Marshall Cohen and Evan Perez contributed to this report.

The new indictment, approved by a grand jury on Wednesday and made public Thursday, alleges that Rhodes and his co-conspirators engaged in a conspiracy to “oppose the lawful transfer of presidential power by force, by preventing, hindering, or delaying by force execution of laws governing the transfer of power.”

The latest court filings revealed that Oath Keeper Thomas Caldwell, who was arrested in January, claimed to take a reconnaissance trip to DC before January 6. The indictment also surfaces previously unknown communications Rhodes is alleged to have sent that prosecutors say encouraged the use of force to oppose the lawful transfer of power.
“We aren’t going through this without civil war. Too late for that. Prepare your mind, body and spirit,” Rhodes allegedly said in a November 5, 2020, Signal message. In December, Rhodes — according to the indictment — wrote of the electoral college certification that “there is no standard political or legal way out of this.”

Prosecutors have previously said that Rhodes used Signal during the attack to communicate with other members of the Oath Keepers who were at the Capitol. 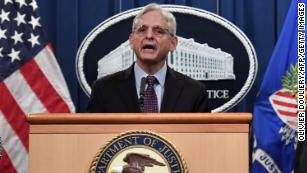 Merrick Garland on Capitol attack: ‘The actions we have taken thus far will not be our last’
“All I see Trump doing is complaining. I see no intent by him to do anything,” Rhodes allegedly wrote. “So the patriots are taking it into their own hands. They’ve had enough,” he allegedly said on Signal at 1:38 p.m. that day, shortly after the siege had begun.
Additionally, the indictment says that that Oath Keepers from three different states, including newly charged Edward Vallejo, stashed weapons in a Virginia hotel as part of a quick reaction force.
“[Quick reaction force] teams were prepared to rapidly transport firearms and other weapons into Washington, D.C., in support of operations aimed at using force to stop the lawful transfer of presidential power,” the indictment said.
On his way to DC on January 3, Rhodes allegedly bought an AR-platform rifle and other firearms equipment, including sights, mounts, triggers, slings, and other firearms attachments in Texas. The next day, he allegedly bought more firearms equipment in Mississippi including sights, mounts, an optic plate, and a magazine, according to the filings.

Accusations of plotting before and after the Capitol attack

The Rhodes indictment walks through public and private statements the Oath Keeper leader made, starting just days after the election, that prosecutors say illuminate the plot to oppose by force the transfer of presidential power.
Those discussions included a November readout that Caldwell reached out to provide Rhodes about a November 9 trip he had taken to DC to do recon for an upcoming “op.” Communications about the “bloody” “fight” and “revolution” were accompanied by logistical planning, prosecutors alleged, with defendants discussing obtaining and bringing weapons to the Washington area. Rhodes allegedly spent thousands on firearms equipment en route to DC, prosecutors allege.
On January 6, prosecutors allege that Oath Keepers stationed themselves around the DC area — some near the Capitol, others providing security and a third group waiting across the river in a Virginia hotel with a cache of weapons. At the Capitol, some members moved in a military “stack” formation into the Capitol where they fought with police, and a small group unsuccessfully looked for House Speaker Nancy Pelosi, according to court documents.
The plotting didn’t end with the Capitol riot, prosecutors say, alleging Rhodes and other co-conspirators met in Virginia to “celebrate” the attack and “discuss next steps.” In a Signal chat to other members of Oath Keepers leadership, Rhodes allegedly said that “Patriots entering their own Capitol to send a message to the traitors is NOTHING compared to what’s coming.”
In the week after the riot, Rhodes allegedly spent more than $17,500 on weapons, equipment, and ammunition. One member, according to the filings, said Rhodes should stay “below the radar,” while another brought what he called “all available weapons” to Rhodes’ home in Texas.
Around Inauguration Day, January 20, Rhodes allegedly told associates to organize local militias to oppose the Biden administration. Another member allegedly said, “After this… if nothing happens…its war…Civil War 2.0.”

The charges mark a dramatic change in the Justice Department’s January 6 probe.
Previously, some Biden administration officials believed using the sedition charge could politicize the Justice Department’s prosecution of the Capitol attackers, and the department recoiled after the former top prosecutor over the investigation, Michael Sherwin, said on CBS’ “60 Minutes” he believed seditious conspiracy could be charged.
Garland said in a speech last week commemorating the Capitol attack that the department was “committed to holding all January 6th perpetrators, at any level, accountable under law — whether they were present that day or were otherwise criminally responsible for the assault on our democracy.”
Rhodes has also been of interest to the House’s January 6 investigation, which issued subpoenas in November for him and his organization for a deposition and documents related to the events of that day.
Rhodes gave a voluntary interview to the FBI and that investigators seized his cell phone. He has denied all wrongdoing.
According to previous court filings submitted by the Justice Department in other cases, Rhodes said at a November 2020 online meeting, “We’re going to defend the president, the duly elected president, and we call on him to do what needs to be done to save our country. Because if you don’t guys, you’re going to be in a bloody, bloody civil war and a bloody — you can call it an insurrection, or you can call it a war or fight.”
This story has been updated with additional details.

CNN’s Marshall Cohen and Evan Perez contributed to this report.