The US Treasury Department announced Thursday that it is sanctioning a Ukrainian lawmaker with ties to President Donald Trump’s personal lawyer Rudy Giuliani, accusing him of being a Russian spy involved in Moscow’s interference efforts in the 2020 election. 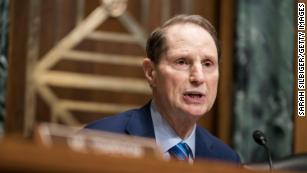 Democrats urge Trump administration to impose sanctions on Russians meddling in 2020 election
Now, the former member of a pro-Russia party who met with Giuliani in Ukraine last year has been added to a list of Specially Designated Nationals, meaning his assets have been blocked and “US persons are generally prohibited from dealing with them,” according to the Treasury Department.
The three Russian nationals who were sanctioned — Artem Lifshits, Anton Andreyev and Darya Aslanova — work for the Russian troll factory known as the Internet Research Agency (IRA). US prosecutors have alleged that IRA meddled in the 2016 presidential election.
The Treasury Department said Thursday that Derkach has waged a years-long “covert influence campaign centered on cultivating false and unsubstantiated narratives concerning U.S. officials in the upcoming 2020 Presidential Election, spurring corruption investigations in both Ukraine and the United States designed to culminate prior to election day.”
“Andrii Derkach and other Russian agents employ manipulation and deceit to attempt to influence elections in the United States and elsewhere around the world,” Treasury Secretary Steven Mnuchin said in a statement Thursday.
“The United States will continue to use all the tools at its disposal to counter these Russian disinformation campaigns and uphold the integrity of our election system,” he added.
Derkach has worked closely with Giuliani to peddle anti-Biden material, which has also been embraced by Republican lawmakers and right-wing outlets like OANN. 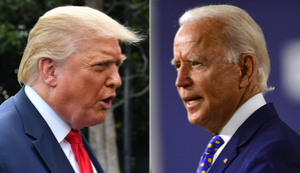 Trump retweets Russian propaganda about Biden that US intel agencies say is intended to influence 2020 election
The intelligence community’s top election security official William Evanina issued a statement on August 7saying Russia was actively working to “denigrate” Biden and accused Derkach of “spreading claims about corruption” to undermine Biden’s candidacy and the Democratic Party.
Ten days after the intelligence community’s statement, Trump retweeted Russian propaganda that contained material released earlier this year by Derkach. Trump has repeatedly refused to acknowledge Russia interfered in the 2016 election to help his campaign, an assessment long confirmed by both the intelligence community and the Senate Intelligence Committee.
Democrats have also charged that Derkach sent information to both Senate Homeland Security Chairman Ron Johnson and Rep. Devin Nunes. Johnson has denied receiving anything from Derkach, accusing Democrats of spreading Russian disinformation themselves with the allegation.
Last week a group of Senate Democrats sent a letter to Mnuchin to sanction those who are who are meddling in the 2020 US elections after the intelligence community’s statement.